When you are trying to get Vivado Remote Connections working on Ubuntu, you might have an issue to establish the connection. This can be easily solved by adding a symlink to your bash, called sh. You can do this for example using the following commands:

Thanks to ole2 for providing this solution in the xilinx forum, which you can find here: forum post

As he points out, this seem to be a bug in Vivado. Vivado seems to call a script with #!/bin/sh and expects a bash to be executed. But for Ubuntu, /bin/sh points to /bin/dash per default. An alternative solution is to re-configure this link using:

In this article I will explain how to root Intel-CPU based android Devices on Linux/Mac OS X. The instructions are based on this forum post. I used this code to root a Medion LIFETAB P8912. However this should also apply to all devices mentioned in this forum post.

The first thing to do, is install fastboot and adb on your PC/Mac. Make sure that you have enabled the development option on your android device and are able to connect to it via adb.

Then place the update, you want to install on the sdcard on your device. In case you want to install the root patch, you can download the latest SuperSU. Note that you will be not able to install custom roms, if your bootloader is locked. If the signature missmatch it will refuse to boot.

The next thing to do is to download and extract IntelAndroid-FBRL-07-24-2015.7z mentioned in the post. It contains a recovery images for CWM or TWRP and some custom trigger code to start a temporary CWM Recovery Session on the device. After reboot this session will be gone. But you can apply updates during the session such as SuperSU. You will not be able to follow the exact instructions from this forum post, because it contains a windows specific batch file and windows executables. However these are just fancy wrappers around adb and fastboot, so you can still use the contained images/launch code.

To reboot your device into the bootloader, connect it to your computer and run, while it is turned on:

Within the boot loader, we will first put the alternate rescue image on the device along with some custom launcher code. I first tried TWRP on my device, but my touchscreen didn’t work with it, so I sticked to CWM:

The next thing to do is to trigger the device via fastboot to start our recovery. The forum post contained 4 alternatives approaches based on the android device. The following (T4) was working for me:

This temporary replace logcat with a launcher. It is important to execute all commands in one shot. Otherwise fastboot will fail to flash logcat.

If the command will not work for you, you could one of these commands:

If everything works it should start the recovery image.

Lets say you want to trigger remote the start of a python script. But you don’t want to have a service running all the time waiting for requests.

What you can do, is using socket-unit in systemd, which is waiting on a tcp port for connections and starts the service, if somebody is requesting it.

In your python code, do the following

This still lacks of authentication and does not take any arguments. You could protect this port using a frontend webserver with http authentication, or you pass the listen socket to an python http server, which add some token passed authentication. Systemd will ensure, that your service will not run more than once at the time.

When using sshd.socket to start sshd on demand, detaching from a tmux/screen session will not work. The reason is once the ssh session is closed, systemd will terminate all remaining processes in the sshd cgroups, which affects also the tmux/screen background process. However this behaviour can be changed using the following drop-in file:

Network Configuration on Digitalocean for Freebsd

By default Digitalocean add some custom rc.d scripts for network configuration to your droplet.

In case you want to add freebsd jails later on, it is a good idea to allocate private ipv4 addresses for these too. In my case I generated as many ipv4 address as ipv6 addresses I got:

To apply these network settings immediately issue the following commands in series:

The second command is important because it adds the ipv4 gateway back. Otherwise you will not reach your droplet via ipv4 without rebooting.

If everything still works, you can remove, the following files leftover from cloudflare’s provisioning:

The bananapi does currently assign random mac addresses to its ethnernet nic, which is bad if you want to assign static dhcp leases. To solve this issue just create the following udev rule:

If you are a ruby user and find it annoying to remove binding.pry by hand, you may find the following snippet useful. (Put it in your ~/.pryrc to use it)

The Docker daemon add his own custom rules by default to iptables. If you use ferm to manage your iptables rules, it is a good idea to prepopulate rules for docker. Otherwise they will be overwritten by ferm as it restarts.

To do so add the following lines at the top of your ferm.conf:

Gathering Crash-reports and User-feedback for Your Android App

tl;dr: How-to use ACRA and a PHP-script for getting fairly pretty crash-reports and user-feedback via email (without ugly Android email-Intents)

I’m the developer of OpenTraining, an open source Android app for fitness training. I recently looked for a possibility to add a simple feedback system to my app. There’s an open source framework for crash reports named ACRA that I decided to use for both crash reports and user feedback.

The Google Play Store offers a crash report system as well, but if you deploy your app on multiple app stores you might want a central instance for collecting crash reports. For user feedback many apps simply open an email-Intent but I don’t think this offers a good user experience.

This is how the user feedback dialog and the generated mail look like: 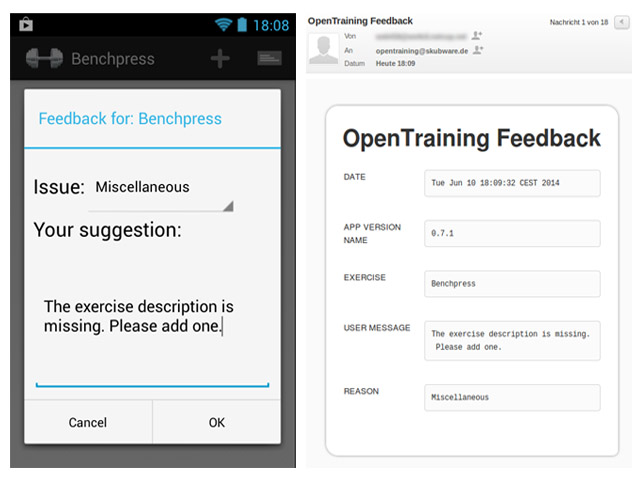 If your project is pretty large you should consider another ACRA-backend. I tried some of them, but as long as I get < 20 emails per week I’ll use the PHP backend.

This How-to is based on ACRA and ACRA-mailer.

The most important changes I had to apply to my project for adding the feedback-feature can be seen in this commit on GitHub (but there have been some more commits concerning ACRA).

1. Add ACRA to your project

If you have any problems with this step have a look at the ACRA documentation. There’s also a description for Gradle integration.

2. Use the ACRA library

Make sure that your application requests the permission ‘android.permission.INTERNET’.

I use 2 different implementations of ReportSender:

The crash reporter sends nearly all data that’s available, the feedback reporter sends the user message, the date and the app version. Add both to your project.

Remember to change the ‘BASE_URL’. Use HTTPS if your server supports it (mine doesn’t).

There are 2 PHP scripts as well:

You will also need the mail template. Change the destination email and add the files to the webspace/server of your choice (e.g. uberspace). If you want you can change the “shared_secret”, but remember to do this in the Java class as well.

Now you should have a try and test sending feedback to yourself:

If this works you need a suitable spot for your user feedback. In most cases a dialog should be fine.

Consider to write your own class(es) that extend(s) Exception. Your PHP script could do further processing with this information.

As you have a server-side script it is very easy to change the formatting of the emails. Highlighting the user comments or the type of exception may be a good first step.

With the use of two different implementations of ReportSender it is also possible to use email only for sending feedback and send crash reports to another backend that is better suited for bug tracking. For larger projects this approach is recommended.

A guide to connect with a different machine using a ethernet cable for internet sharing or just transferring files:

After that the other machine can connect via dhcp. It will get an ipv4 address from the 10.20.0.0/24 subnet and a ipv6 address from the fd21:30c2:dd2f:: subnet. Your host will be reachable via 10.20.0.1 or fd21:30c2:dd2f::1. Thanks to ipv6 router advertising, an AAAA record for each host is automatically set based on the hostname. This means if your hostname is foo, all members of the network can just connect to it using the address foo. You should disable the share-internet.service, if you don’t need it. Otherwise you might mess up network setups, if you connect to a network with the device on which the dhcp service is running.

If you have luck and your wifi driver is capable of the infrastructure mode, you should take a look at hostadp, in my case I have to create an adhoc network. To enable the adhoc network: